As the ice on Pasha Lake battled to stay intact, Ian and I were busy working on camp, updating cabins
and making repairs from the damage caused by the harsh winter. On the top of our to do list was the
conversion of cabin 9 from a standard to a deluxe. Each day while working, we’d eventually pause long
enough to glance up, assesses the constantly changing conditions and update our predictions when the
soft water would finally win the battle against the hard water. My annual notes told me ice out would
be May 12ish, Ian’s experience told him it would be later. In the end, the remnants of ice on Pasha Lake
finally succumb to the warmer temps on May 14 th – official ice off on Pasha Lake.

While Ian and I were busy swinging hammers and arguing about ice conditions, several anglers due to
visit Ontario were growing very concerned. Ice conditions where they’d previously booked
accommodations (namely to the north of the Pasha Lake / Lake Nipigon region) were still socked in with
plenty of ice, and the dire situation had no signs of changing. In fact, outfitters were having to make the
dreaded call to their guests – “sorry to inform you, but we have to cancel your trip due to ice swallowing
up our fishing grounds”. It’s a call no outfitter wants to make and no would-be guest wants to receive.
But – mother nature in Ontario has a way of forcing her will on all of us.

As sat at my kitchen table, catching a quick bite to eat and taking a break from the grueling camp work,
my phone rang. I glanced over and noted the call was originating from Wisconsin, likely the Milwaukee
area given the area code.

Being my jolly ol’ self, I picked up the call and bellowed out a cheery greeting, while at the same time
trying to ignore the pain in my knees, back and hands courtesy of the endless labor we’d be doing in for
the last 3 weeks.

On the other end was Curt who promptly explained he was the group coordinator for an 8 person party
that had booked accommodations at an outfitter 90 miles to the north of us. He explained the lake they
had planned to fish was still iced-in, the outfitter cancelled his booking and he needed a back up place
quick.

While he was explaining his situation, I couldn’t help but to ponder how sucky it would be to book a trip
months in advance, coordinate everything – travel, accommodations, border crossing, food, ect – only
to have the rug pulled out from underneath you hours before you’re suppose to depart for the trip. The
disappointment would be overwhelming I thought!

After Curt and I chatted awhile, me explaining our adventure oriented multi-lake, multi species fishing
style and him asking questions, he took the info back to the group. In no time, I received a call back and
Curt and the boys were headed to Pasha Lake Cabins.

Not long after I hung up the phone with Curt, did it ring again. This time it was Mitch. Same story –
same disappointment. But, like Curt before him, Mitch was intrigued by what we offer here at Pasha
Lake Cabins, and he too diverted his travels to our little paradise.

After driving all night from Wisconsin, Curt and his chums rolled in, eyes red, backs stiff, legs tight from
the marathon gauntlet. It was important we get their trip off to a good start, so I gave them the camp
orientation and suggested they take a load off at their cabin. Later, I offered to take all of them to a
favorite lake just down the road. My goal was to introduce them to our special style of fishing and
confirm for them they’d had made the right choice in coming to Pasha Lake.

Getting 8 guys and me organized and on the water took some doing, but in reality not too long. We
stumbled a little bit out of the blocks but once on the water, we aimed for a spot where I knew (and
prayed) the walleyes would be holed up.

In my boat was Curt, and Bob, his dad. As I slowed the boat on the approach, I stuck my transducer
suction mount on the stern and noted immediately how chilly the water was. I glanced down at my
Lowrance and gasped at the balmy 39 degree reading. WOW! That’s cold. But I also knew that was a
good sign the walleyes would be right where I’d hoped. It didn’t take long as I patrolled the mud flat
before I saw it – walleye arcs! When my marker splashed into the water, I couldn’t help but notice the
awkward looks from the guys in the follow-on boats. Under my sunglasses I snickered back at them and
thought to myself – just wait and see.

It took a little longer than I hoped, but I immediately recognized the “whoa” that came out of Bob’s
mouth. It was a verbalization that lacked any meaning in the English language, but was unmistakable in
fisherman’s’ speak – Bob had hooked the first walleye. And boy it was a dandy – a 26” blue. After
photos and atta boys, I broke the news to Bob that we couldn’t keep the fish. I cited Pasha Lake Cabins
Big Walleye Rule: all walleye over 18” go back. It was like someone had just stole his Halloween candy,
but I assured him we’d catch more.

When I glanced around, I observed consistent action among the other boats too. The wind was
throwing us a curveball when small squalls would come and go, but we persevered. Eventually I had to
throw on my big winter jacket as the sun was descending and the temperature noticeably dropping.
And then Bob hooked another. This time a Jumbo perch that was bigger than most of the walleye’s we
were catching. The thing looked like something out of Jurassic Park – the girth and length was
astonishing.

It didn’t take long before ol’ Bob started coaching all of us, as he landed fish after fish. He certainly had
the hot hand and wasn’t shy about letting us know. It was a joy to watch him gleam with each fish he
hoisted from the water. And it was particularly entertaining listening to him coach the others from his
little perch in our boat.

Eventually we all noticed the chill starting setting in. Someone suggested we ought to think about
heading back to the lodge. It didn’t take much convincing – even for me. My hands and fingers were
numb from replacing minnows on Bobs hook every time he boated a fish. I was pretty okay (if it’s legal
to write “pretty okay”) to leave, but tried to hide it, not wanting anyone to think I was some type of
tenderfoot. I’m sure all of them saw right through me.

In the end, we had a mess of walleye, Bob’s jumbo perch and a few pike to boot. It was enough fish that
stuffed all 8 party goers and left them feeding into lunch the next day.

Oh, and what about Mitch? On a distant lake, far away from my trip with Curt and his crew, Mitch was
laughing like a little school girl. He and his boys stumbled on to a pike bite that left them in awe and
scrambling for more. Fast action, big fish lots of photographs and big smiles. Mitch was so excited after
catching his first ever Pasha Lake Cabins 40” pike that he promptly fell out of the boat. All I can say is
BURRRRRRRRRRR! With the ice going out less than a week before he stepped foot on the water – that
had to be a very cold experience.

And then it happened. Just like that, over beers one night, Ian and I looked at each other and our
expressions told it all. We had kicked off the 2019 open water fishing season – not with a bang, not with
a celebratory breaking of a Champaign bottle or with some arduous ceremony. Nope, we had kicked off
the season with simply doing what we do best here at Pasha Lake Cabins – we catch big fish and lots of
fish. We catch multispecies and angle multi-lakes. We go on adventures – we break things, we get bug
bitten, cold, wet, hungry and we experience fresh water action unheard of anywhere in the fishing
world. It’s what we do, and I might proudly proclaim – we do it well! 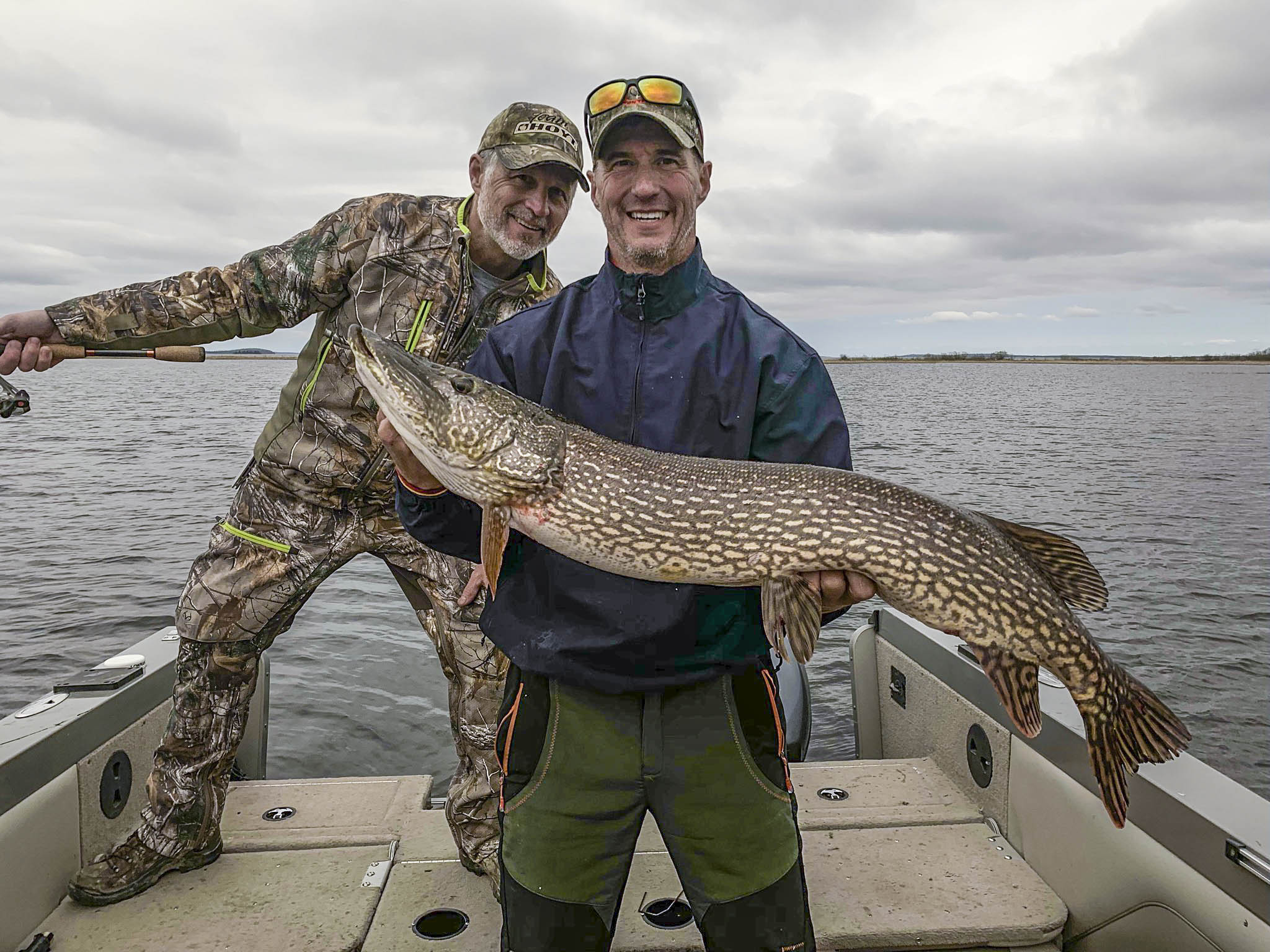 And that brings us to now –

All the groups from the first two weeks have been downright awesome:

Mr. Doan – if laid back were a sport, these guys would be the top professionals of their game. Relaxed,
adventurous and catchers of many speckled trout

Mr. Paul Miller – a family that rivals the population of China – all gleaming and giddy to catch BIG fish.
And oh boy did they catch big fish. After the first full day on the water – they earned themselves 2
trophy club hats for pike over 40” 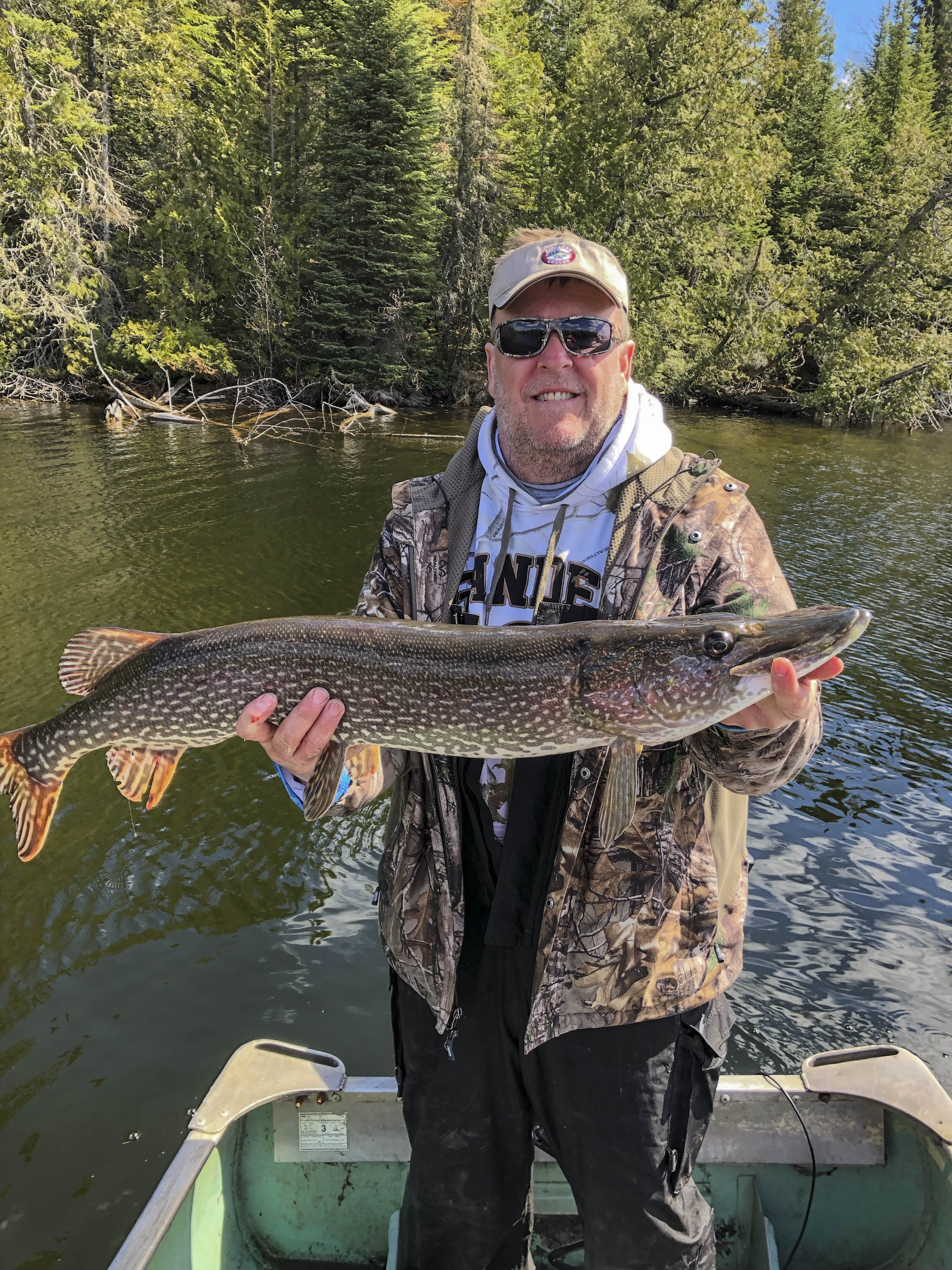 Gary and Larry and the boys – my favorite group from West Virginia. They have been coming here since
the first season Michelle and I purchased Pasha Lake Cabins. They have landed thousands of pike –
literally. (They even have the clickers to prove it.) Like the Doan’s they too are so laid back, Id have to
check their pulse if they weren’t standing there talking to me. And never mind I can only understand
every 5 th word out of their mouth as I try to decipher that entertaining West Virginia drawl.

And Scotty and Joel Gritters – both my fishing mentors. Their x2 trips a year are the top highlights of the
season for us ( the spring and fall). Scotty having achieved a fisherman’s milestone – catching a fish in
every county in the state of Iowa and Joel – well Joel is special. Their generosity never ceases to amaze
me – they handed Michelle and me two full bags of morel mushrooms this year. 1000 thank yous boys!
Fishing was a bit slower for them this year – so they say – but my guess is they are keeping tight lipped
as usual!

And who could forget Jordan S – Jordan was the first fisherman to stay in our newly acquire remote
cottage. Another fantastic trip full of ginormous pike, giddy laughs and big smiles. So much so, he was
forced to book his 2020 trip before his boots dried out from this year’s trip.

As I finish writing up this update – I find myself smiling yet again. The Lord has blessed all of this with
this little paradise called Pasha Lake Cabins. I’m sure he wants us to exploit it to it’s fullest – use it but
don’t abuse it. Enjoy it and protect it for generations to come.

As always – I have the best intentions to write these updates as frequently as possible. The reality has
always been and continues to be – it’s a challenge to devote time to this important task during our
busiest of seasons. My promise is this – I will write when I can and as much as I can. That maybe
frequent or not at all. Please stay tuned and thank you for taking the time to read about this
fisherman’s corner of the world. The Thompson family, Ian, Judy and all who support us here at Pasha
Lake Cabins thank you!