Lewis and I (brothers) went up to Pasha Lake twice this year. The first trip was from the end of December ’03 thru January ’04, and the second trip was for a week in March ’04. Both times fishing and snowmobiling were our purpose for the trip, and both times, they were the best we’ve ever experienced.

The first trip it was colder with temps in the -10’s in the morning into the 10’s in the afternoon. Lots of sun all day, every day. Walleyes were jumping out of the holes and splake were fighting like none other. The northerns were slow, but quickly compensated for by the walleyes. One of the best times was our trip to the “Splake Lake”. We ended up catching about 35 Splake in 4 hrs of fishing. The majority were in the 12″-20″, but more than a few were 24″-26″. The picture is of Lewis with the biggest one, a 26″, 8lbs Splake, which after the picture, was quickly released. Without a doubt, a day of fishing that will not soon be forgotten. 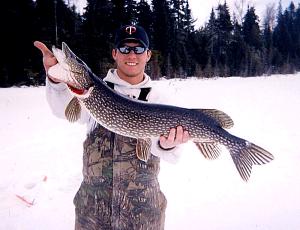 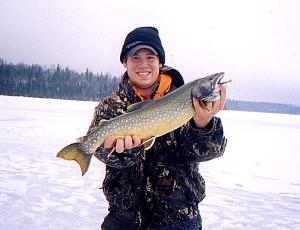 The second trip, however, was a different story. It was made possible by class being out for a week for spring break, and while the other 99.9% of the college student body was getting golden brown and meeting those cute little Latino girls, we were bundling up each morning heading out on snowmobiles to go fish on ice that was over 4 feet thick! Oh well, some things (warm weather) just don’t suit some people. But the fishing was something you won’t find in the lower 48. Northerns were the name of the game with the Walleyes a little slower than normal. Everything was working for us, tip-ups, jig poles; heck, they would’ve bitten on one of our boots if we were to have stuck it in the hole. The catch of the trip was by myself (Mitch) on a jig pole with a Dr. Spoon. Weighing 20lbs and measuring close to 40 inches, it’s a fish I will be telling my grandchildren about in future years. This monster was also released soon after being reeled in.

All in all, Pasha Lake is everything I hoped it would be and will be in my vacation book for many years to come.