We set out for the highly touted Splake Lake on the morning of New Year’s eve. Myself and a few others were rookies to the Splake Lake, but joining us on this adventure were Chad and some Splake Lake veterans. The adventure began by loading up the snowmobiles, four wheelers and gear and heading for the lake. After a nice drive filled with the anticipation of what lay ahead, we arrived at the lake and headed out onto the ice. We arrived at the “spot” just as the morning sky was catching its first silver – blue color of sunrise. Chad quickly began plugging a series of holes in the ice and within minutes we were fishing. The fishing started slow in the darkness, but I could see it on the faces of the experienced Splakers that the magical time on this lake had not yet approached. Once the sun came up, or what we could see of it on this cloudy day the festivities began with a flurry of fishing action. The first Splake was hooked and landed, and from that point on there was never more than a five minute time span where someone was not setting the hook!

The fishing was phenomenal! Austin, a fellow rookie Splaker joined us on this adventure. At eight years old, I am not sure he quite realized the event he was experiencing, but he was enjoying every minute of reeling these fish in. Austin got to experience excellent fishing that many adults can only dream of, all at the age of eight! This was probably one of the greatest four hours of fishing through the ice I have ever had! Our group had a great time on the Splake Lake and I cannot think of a better way to reflect on the passing year and bring in a New Year, than fishing with friends and family at a great place like Pasha Lake Cabins. A few of us got on the lake as “Rookie Splakers”, but we all left the lake as veterans! Fishing like this has no age limit, my smile was just as big as the one Austin was wearing the rest of the day! Thanks to Chad and Michelle for a great weekend of fishing, great accommodations, and the memories that will last a lifetime. I will definitely be back to take in this experience again! 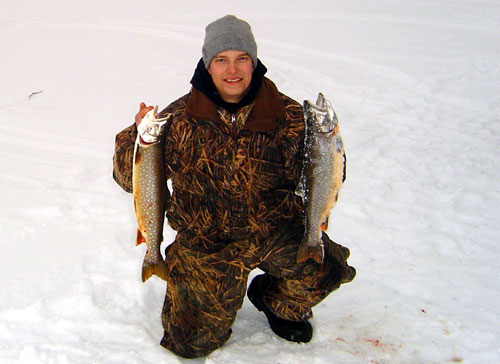