This was our third trip to Pasha, and we still had not landed a trophy walleye. We woke to a cloudy July 1st, got bait from Darrel and drove to our favorite walleye lake for a day of fun.

We motored out to a small point less than 1/4 mile from the landing, killed the motor and tied jigs to the end of our lines. I helped my sixteen year old son Tim and my wife Deanne get their rigs ready, then turned my attention to my own fishing. I hooked a lively minnow on to a green and yellow jig and dropped it overboard. The jig hit bottom and an instant after I closed the bail of my reel I felt that wonderful subtle walleye tap. I set the hook and I immediately knew it was a big fish.

after a great battle, Tim netted a 28 inch walleye, my biggest ever! Twenty minutes later I landed a 25 inch walleye, and shortly after that Deanne hooked a beautiful 22 inch blue walleye.

The bite slowed a little, so we moved to another point and drifted from deep water toward the shallower sand bar when Tim suddenly set the hook and said, “Ooohhh!”.

Deanne and I offered moral support while he played another big walleye like a pro! I netted another 28 incher for him, and we all agreed that Tim’s fish was probably heavier than mine because of it’s greater girth, a simply gorgeous fish.

In less than two hours we had caught two 28’s, a 25, a 22 inch blue, and had a limit of 16 to 18 inch fish on the stringer, the most fantastic day of walleye fishing I have ever had! We fished for fun the rest of the day, catching and releasing numbers of walleye until we ran out of bait.

Driving back to Pasha we talked about how much fun it was catching and releasing the big walleyes.

The Pasha phrase, “Think big fish, and lots of them” was true for us on tht perfect day!

We would like to add, “Nice place run by nice people”! 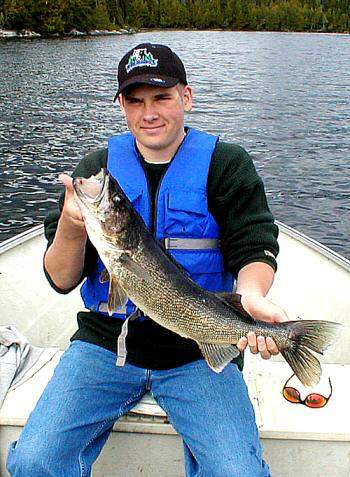