The 5 Most Common Mistakes of Black Bear Hunting:

Below you will find the information you need to guarantee yourself a successful Ontario Black Bear Hunt.

Instead of showing you the same old stuff you see on every other outfitter’s web page, we thought we would give you something you could really use.

You see, if you clicked into this web page, there is a high probability that in the near future you are going black bear hunting in Ontario. The only problem is, there are 100’s if not 1000’s of black bear hunting outfitter’s to choose from. All of them with the same pictures and statements about how great they are and why you should choose them.

If you choose to black bear hunt with us, cool. Anyone can put you on bears, but few can match the service and quality of hunt we offer. If you choose to go somewhere else, then we hope you find the following information useful no matter where your black bear pursuits take you.

Here is a complimentary Bear Tips article on Smell

Mistake #5 – Being Afraid of the Dark

Sounds silly, but don’t let it fool you. It is an ungrounded fear and one people need to overcome in order to have a successful black bear hunt; especially if you are hunting for a trophy.

It can be very intimidating leaving a bear stand, by yourself, in the middle of the dark when you know with 110% certainty that there are active black bear in the area. You’d be off your rocker if you weren’t a little apprehensive.

When you are hunting into the twilight hours, and getting ready to depart your stand, remember this.

Since 1883, in North American there have only been 30 reported black bear fatalities, most of which occurred during non-hunting activities. That means in 125 years, there has only been 30 fatal black bear attacks and subsequent deaths. With the 100’s of thousands of hunters that take to the woods every year, that puts the odds of being attacked by a black bear inconceivably in your favor.

Hunting until you can’t see anymore gives you better odds when pursuing that trophy black bear of a life time. Most BIG black bears are taken within a half hour from dusk, when the smart animals feel most secure eating from an unnatural food source. Stay in your stand as late as you can, and the odds of shooting a monster increase tenfold. 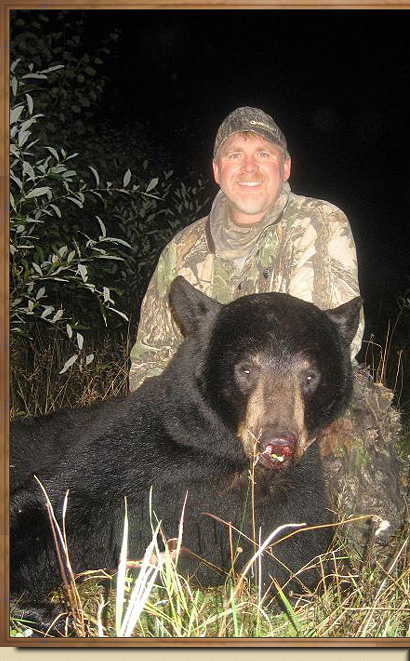 And should there still be bears on your bait when your ready to leave your stand (although this rarely happens), shining a light or a sudden loud noise will send these skittish critters running for miles. Black bears, in their natural setting, are extremely fearful of humans, and would rather turn tail and run then face an unknown advisory. Mistake #4

Many people take to the bear stand, rightfully so, with excitement and anticipation of a successful hunt. Myself included, I get like a little child full of excitement when hunting these magnificent creatures. While most hunters will do a tremendous amount of prep work prior to the hunt, few prepare for what happens after the hunt.

Bears rarely pile up on the bait or in an open area with easy access. Instead, these hearty creatures are famous for taking a double lung shot and running for miles, deep into thick woods and cedar swaps.

Having a plan on how to recover your trophy will put you light years ahead of most black bear hunters when it comes to a successful hunt. Planning should include how to track and more importantly flag the path the animal takes. What to do if it starts to rain or gets dark. Who will help you track the animal and once found, how will you get it out? And how to protect the meat from spoiling on a warm fall night. Mistake #3

Underprepared for long hours in the stand

Part of the thrill of the hunt, is the anticipation knowing that with every second that ticks by, you are one second closer to harvesting your trophy black bear. What happens when those seconds turn into hours and then into days? Being under prepared to be in your stand for extended periods of time can be frustrating, and worse yet, can prevent you from achieving a successful hunt.

It would be awesome if we knew when and where the harvest was going to take place, but that wouldn’t be hunting then, would it?

Having a plan in your bear stand can make your hunt much more enjoyable. Things to consider: weather, bugs, boredom and nature calls.

Weather – Avid hunters know that fall weather can change in a heart beat. It can go from warm, to cold, windy and raining in the blink of an eye. Having the right clothes in your back pack can make the best of a somewhat undesirable situation.

Bugs – can be a huge annoyance in the great outdoors. Especially when you are forced to sit still for extended periods of time. Avoid bug sprays when bear hunting… PERIOD! A new, unfamiliar scent, along with an intuitive feeling that something isn’t right, will keep trophy bears from over coming fear and committing to your bait. Bug jackets and bug nets are a must. (Oh, on side note, make sure you practice shooting with your bug net on, more about that later). Regarding the portable propane bug eliminators. I have seen hunters use them with success. In fact, in 2008 there was a beautiful 350lbs sow taken while a hunter used one, however my vote is not in on them.

Boredom – Nothing will end your hunt faster than impatience and constant movement in your stand. If you are like most guys who can’t sit still for more than 30minutes at a time, you must bring something with to occupy your mind. I personally use a book. I have also seen guys use those portable, pocket video games. Regardless of what you use, make sure you sit sill and be quiet!

Natural Calls – Ever been in the stand when all of the sudden you have to take a pee? Sucks, doesn’t it? I don’t know how many times I have had this happen to me, yet somehow I always forget to bring a container along. Put a portable urinal on your packing list. Doing so will make the difference between shooting that monster and taking it’s offspring.

Found the above info useful? Email us now to get the last two mistakes, including the #1 THE MOST COMMON mistake of black bear hunting!

Email now [email protected] to get this complete report and arm yourself with the knowledge to guarantee yourself success during your next Ontario black bear hunt.