Pike on a Diet 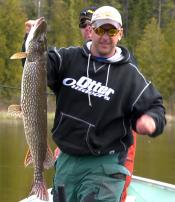 As we shook hands for the final time, I have to admit I was a bit sad seeing the IDO crew leave. The last 4 days had been a fishing marathon dreams are made of.

In the times James and the boys have been here in the past, Mr. Holst has shown a huge interest in chasing swamp gators on Lake Nipigon. So when I called him in April and tabled the idea of a spring pike extravaganza, he pounced on it like a 45? pike to an X Rap. He was hooked and there was no breaking free.

Fast forward to last Wednesday of last week. It started early and the over cast skies brought a smile to my face. Experience in my corner, I knew these conditions have resulted in bent rods and pictures of Pasha Lake?s guests holding trophy pike. I also knew it wouldn?t be a numbers game, patience would be key. Unfortunately though, my picture perfect pike conditions soon gave way to sheets of rain and gale force winds. There was a big system moving through and we both knew fishing was going to be tough in the next 48 hours. 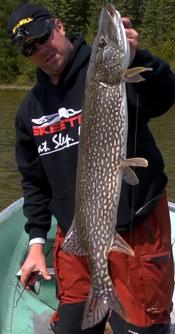 With the odds stacked against us, what happened next is exactly what we are all about here at Pasha Lake Cabins. We will stop short of cannibalizing our own kin, but there isn?t much we won?t do to catch fish. And with Lake Nipigon turning up here nose, I told James, it?s time to go inland.

In the Pasha Lake Region, there are plenty of inland water systems with huge fish potential. The landscape is polluted with lakes, streams, rivers and backwaters all interconnected in Mother Natures perfection. With little angling pressure and good conservation practices, the conditions are always prime for world class fishing. Knowing this, we took full advantage of the situation.
The following morning required a brisk and rather bumpy ATV ride into one of my ALL TIME favorite big pike lakes. I couldn?t help but get a little jittery knowing what was to come. After we launched the boat, I pegged the throttle making a bead line to what I call the Bay of Pigs! And sure enough, when we arrived, James warmed up with a cast to shore and had a mid 30?s try to attack his lure. I knew then, we were in for a great day of fishing.

As we quietly continued in to the dangerous pike waters, you could see them laying right up in the shallows. ?There?s one?, ?OH MAN, lOOK AT THAT ONE?, ?HOLY SHEAPSHEAD (insert reality term as you wish)?.

But, as anybody who has been trophy pike fishing this early in the year knows, seeing them is one thing, getting them to bite can be a very different story. As the day progressed, we realized we had to make artillery like casts from a far distance and work our lures slowly and methodically to trigger bites. In one occasion, James saw a big fish swim under the boat. I made a cast in its direction and literally let the suspending X Rap sit there in the water. Every once in awhile, I would give it a tiny twitch, thinking no way she?ll go. After several minutes of enticing, I felt the tiniest little tick and instantly hammered the hook set. When we got her to the boat, it was miracle we landed her being there was only one hook from the rear treble stuck in her lip. The gal turned out to be one of the biggest of the day, a touch shy of 41?. In the end, our cast to fish ratio was north of 25/1. 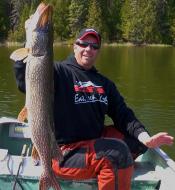 Our success on this occasion can be summed up in patience, stealth and having the proper terminal tackle to close the deal. Once we figured out how finicky the big girls were going to be, we backed up and shut the motor off. We deployed the drift sock for a slow controlled drift and hammered cast after cast from the far. But the real key was being able to suspend the lures right at their noses. Slow retrieves with pauses and twitches eventually over came their reluctance to bite. Most people would have moved on (myself included) after a few casts. Having the patience to stick it out and the right gear to do it with, made this adventure one that will stick with me for many years to come.